Skip to content
HomePosts tagged 'Guardians of the Galaxy'

Although it’s a few months away I’ve began my watch through of the Marvel Cinematic Universe movies for when Infinity War is released. My plan is to have watched all of the movies that are available on BluRay by the time Black Panther is released.

I love these movies, the way each one works on its own but is also part of that bigger picture. It’s quite exciting to be on the brink on what has been building for the last decade. 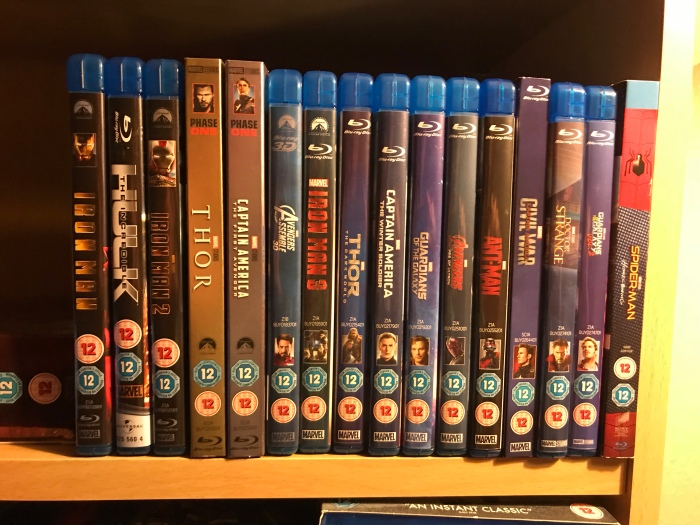 These last two nights have been real slack off nights. Last night I watched Guardians of the Galaxy (still, an awesome movie!) and tonight I’ve watched a bit of football, but I did manage to get a couple of key points well outlined. I’ve also been working for half an hour or so in the mornings before work.

This outline is nearing 4000 words now, and I’m maybe about halfway through it. I’m not really sure if an outline is meant to be this long but I’m guessing it’s like writing in that each person has a way that works best for them.

Tomorrow night I’m going to try and crack on and get this outline done. I’ve had a couple of nights off (for the most part) so I want to get back in the saddle tomorrow.

The story starts with a young Peter Quill sitting in a hospital listening to his Walkman, he’s led into see his mother who’s laying in a hospital bed by his grandfather. His mother dies and the young boy runs out of the hospital with tears streaming from his eyes. He falls to his knees on a grassy hill covered in mist just outside the hospital, and A spaceship bathes him in light and we cut to the animated Marvel logo and I get goosebumps because, with a lump in my throat and tears close to falling from my eyes, I know this is going to be a movie that exceeds my high expectations.

This is a blog post that I’ve been trying to figure out how to write for some time now. I’ve tried writing a very technical one which looks at all the strong points of the movie and the few weak points. I’ve tried writing one from the heart, which was pretty much me gushing about how great a movie Guardians of the Galaxy is, and thats what it is, A great movie. I saw it four times at the cinema and I’m itching for the Blu-Ray to come out so I can watch it again. Yes, it is a little predictable but who really cares? It’s a movie which not only all but brought me to tears two or three times each time I watched it but it also had me laughing, leaning forward (especially when Drax passes Rocket the gun as he’s atop Groot during the prison escape, ‘Oh Yeah’) and during that first screening there people clapping and there was almost people cheering! Now, that’s something I’ve never known in a cinema before.

Above everything else though this movie was fun. From when we’re watching Peter Quill a.k.a Starlord, dancing around a ruined alien planet till the stingers at the end. This is a movie that knew exactly what it wanted to be. I’ve heard a few people saying that this is a movie which has director James Gunn’s finger prints all over it, and having only seen his film Slither I can see what they mean a little by that. Having Gunn direct I think was a master stroke by Marvel and I’m itching to see what they do with the sequel.

The cast was spot on as well, Chris Pratt, Dave Bautista and Zoe Saldana were very likeable, although I’d like to see Saldana’s Gamora freed up a little. She seemed to carry the weight of knowing just how much danger they were all in. Bradley Cooper and Vin Diesel did the voice work for Rocket and Groot and both were brilliant, Cooper especially was unrecognisable as the foul mouthed racoon. Theres a very strong supporting cast which includes Lee Pace, Glenn Close, Michael Rooker, Benicio Del Torro and John C. Reilly. A special mention for Karen Gillen, who played Nebula. She was fantastic I thought and took the attention of most of the scenes she was in.

A lot has been said of the fantastic soundtrack this movie has, and it deserves the praise as it does add a huge amount to the film but I just want to talk about the score, which I think was very good. It’s very reminiscent of the soundtrack for The Avengers I thought.

For me this movie has shot straight into the top five of my favourite movies, in fact it’s probably at the top. Having seen it four times, it got stronger with each viewing, I think this will be my Star Wars.

This last week has not been very productive. Aside from Wednesday when I went to a write-in with my local NaNo group I haven’t really done much writing. Monday, I really can’t remember what I done. Tuesday I went to see Guardians of the Galaxy (yes, again) with a friend and on Thursday I was out with my work colleagues for a meal. Last night I was really wiped out so i just chilled out and watched RoboCop (2014) again.

Once I got home this afternoon I cleaned out the hen houses (we’ve just brought five more chickens) and I’ve watched the football and worked on the timeline for The Residents. Now I’m watching The Birdcage.

So basically I’ve done pretty much sod all this last week, so this coming week I need to pull my finger out and get cracking. I’ve decided what to do for my NaNo novel for this coming November, which is the sequel to what I wrote last year; Earth, After Liberation. So this next week I’m going to be going through my edit notes and make the changes I want to last years NaNo novel. The beginning of the follow on novel has been in my head since last year. I’ve decided to do this one because it’s in a universe that I’ve already created and as I’ve got The Residents and Project Apollo quite actively on my mind I don’t want to have to start from scratch with something new.

I really need to get stuck bad into Old Man’s War by John Scalzi. I’m enjoying this one but as I’ve had a busy week I haven’t found the time to read much.

I’m going to end on a sad note. I, like many people, grew up watching Robin Williams entertaining the world. Whether it was Mrs. Doubtfire, Jack, Jumanji, Patch Adams or my personal favourite, The Birdcage. I’m not going to get into how he died or what may have lead to his death. To me he was a once in a generation talent who could not only add the comedy but also the drama.

I’m going to miss seeing him on our screens.

Okay, so I should have written this on Sunday, but I forgot and the last couple of nights I’ve been busy.  As you can see by the title of this post I completed my 2nd draft of the vampire collection I’ve been working on and it’s now in the safe hands of Beta readers. I did have feedback on two of the stories from a friend and she said she loved them 🙂 ( I know you’re thinking ‘she’s his friend, she’s meant to love them.’ believe me, this friend would tell me if she didn’t like them).

Now I’m dancing between The Residents and Project Apollo; Chrystalyn and I would like to get started on The Residents soon so we’ll be aiming to up our planning in the next couple of weeks. The story and characters and the world building is pretty well thought through at this point so I think we’ll be focusing on planning and research. Project Apollo is growing well, despite the odd hiccup,  but I’m not sure when Owen and I will be looking at getting cracking with this again as we have a lot to do before we can start writing. We haven’t spoken of schedules yet but I’m not sure we’ll be ready to really jump in this side of December, if not early 2015. If I’m honest I want to spend most of my writing energy on The Residents and be doing the planning bits of Project Apollo around The Residents. This last ten days I’ve been editing the vampire collection and working on developing notes for Project Apollo. This seems to be quite a good way for me to work; having a primary project and a secondary project. I like having two projects on the go as when I get stuck on one I can flitter over to the second and then as I’ll be planning and not writing I can exercise a different part of my brain 🙂

That’s all for now, I’m going to shut everything down and get a chapter or two of Old Man’s War by John Scalzi read.

Through all of the talk before we saw any footage of Guardians Of The Galaxy I was excited about this movie. I know nothing about this comic book aside from it being Marvel created and that was good enough for me, oh and its directed by James Gunn.

When the trailer came out I watched it with a childlike excitement and I wasn’t disappointed. I watched it a good four, maybe even five times straight away after and pretty much screamed it from the rooftops. The characters look and come across as awesome, there seemed to be a very good sense of humour to it too. When I went and saw Captain America: The Winter Soldier they had the trailer before it and seeing it on the big screen has just made me even more eager to see it. I have decided though, that’s it. I do not want to see anymore trailers, or read any articles, or listen to any reviews about Guardians of the Galaxy until I am sitting in a cinema to see it.

Although Marvel don’t seem to do this I see a lot of trailers where the film is all but told and for Guardians of the Galaxy I want to go in with no idea of what the story is. The trailer gave us an idea of the characters and that is good enough for me.

Now all I have to do is avoid the minefield of the internet.