Yesterday I was at the Wireless music festival in Hyde Park London.  This is the third year that I have been to Wireless and I have to say I think this year was the best that I have been to.  The last two years I have gone with my friend Carla, but this year we were joined by Carla’s friend Sherry and my Girlfriend Tracie.  The previous two years me and Carla were right at the front squashed in which was fun but this year me and Tracie were off to one side and for me it was a much more enjoyable experience.  It was nice having some space and let the music take centre stage.  Speaking of music I guess I should talk about that a little lol.

Example was by and far the best act for me.  I remember seeing him the first year that I went and he really impressed me with his stage presence on stage and he’s talent and he has now clearly upped his game as he was even better yesterday then he was two years ago.  He came on and the crowd gave him a truly warm and enthusiastic welcome and he repaid us with a damn good show.  I am not a huge music person so I have not seen lots of acts or been to many festivals or concerts but Example has got to be the best act that I have seen.  I like his music and him a lot.  Example was worth the admission alone.

My Girlfriend loved Professor Green, she is a big fan of his anyway but she danced away to his entire set like only true fans can do.  I like his music but no to the extent that I’d say that I am a fan but he was very good and held the crowd well.  For Tracie he was worth the admission alone.

Rita Ora has only recently come to my attention but her song R.I.P is one of the best songs I’ve heard in its genre.  It has a great pace to it which really gets the blood pumping and she looked like she loved being out on that stage.

For us the day was pretty epic.  The weather treated us well with only a little rain, the acts generally were very good with the three listed performers above the best of the pick although we did not stay to see out Nicki Minaj’s set and missed Drakes complete set.  We’ve already made plans to go again next year 🙂 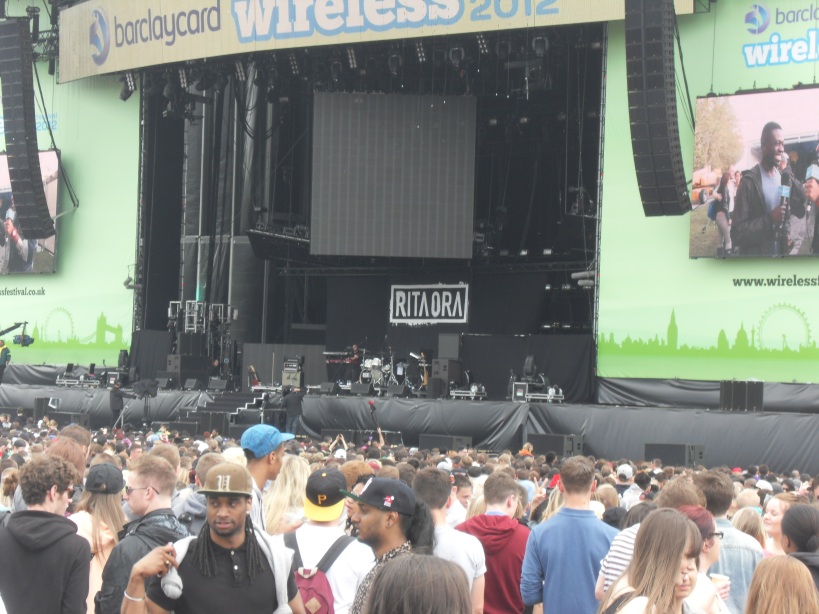 Myself and A friend attended the Wireless Music festival at Hyde Park in London again this year.  This is the second time that we attended after having so last year.  Wireless 2010 was my first experience of a festival and it pretty much blew my mind away. I have always enjoyed live music but had never thought of going to A large festival as opposed to a local location like Beacon Court in Gillingham or Command House in Chatham.  Last year the acts at Wireless that really sat in my mind are Snoop Dogg, Missy Elliott and most of all Example.  I (obviously) know of Snoop Dogg and Missy Elliott but I had not come across Example and he really, really did impress me.  He looked the part and clearly enjoyed himself and his songs themselves are amazing.  Kickstarts is now one of my favourite songs now.  So going to Wireless this year on the Saturday I had a lot of anticipation of discovering someone new, and Janelle Monea is that person.  I am going to buy her album because it was an excellent show.  The stage was set up in all black and white and her band, backing vocalists and performers were all kitted out in black and white.  She was also, but it was not some dodgy outfit that she wore but smart black trousers and a white blouse, I’d imagine on a cooler day she’d be wearing a suit tuxedo jacket too.  She had a kind of ring master that was in top hat and tails who fired the crowd up before Janelle Monae took the stage.  All the people that she had on stage looked like they were having the time of their lives.  From the keyboard player to the dancers all had a good chemistry.  There was a little choreography but it was subtle and well worked.  The music itself stood up aswell.  It had a sort of early Jackson 5/Michael Jackson feel to it.  She has A very soulful and powerful voice.  I’m looking forward to getting hold of her album.

Katy B was damn good too.  Her set was not nearly as theatrical.  She simply let her music do the talking.  She played a few songs of hers that I had not heard and it reminded me that I need to get her album. She looked like she loved being on stage there in Hyde Park and the crowd loved her too.

The act that I was really blown away by was Ke$ha.  I like her music A lot and had forgotten that she was playing so I was well chuffed when I was reminded that she was in fact there.  Her music in my opinion speaks for itself but the stage show that she put alongside her music was her down to a tee.  There was an overall 80’s Punk theme to it and lots, and lots of glitter.  What really impressed me and I think was needed otherwise the performance would have failed was the energy from Ke$ha and the team she has on stage with her.  From the drummer to the two male dancers that she has throwing themselves across the stage all gave a 110%  There was a lot of chemistry between them all, especially these two male dancers and her two backing female vocalists who played various instruments and danced around on stage, and Ke$ha and for me this was the true selling point.  This was the part of the performance that really sucked the crowd in . I cannot sing to save my life, nor can I dance and I am hopeless with an instrument so I have no idea how hard it is to get up on stage and perform like this.  I have no idea how much hard work must go into it, but they looked like they were enjoying it as much was I was.  It was clear that this wasnt just one big step by step routine. There were A number of moments where someone would do something with someone else on stage and the reaction of the other person is just one of surprise.

We only stayed for the Streets after that, seeing Chromeo before they played.  Chromeo were good and they had A lot that I could like about them, but I was irritated by the simple fact that they kept repeating their name.  Dont get me wrong I have no problems with self promotion but it felt like every fifth line was their name.  Their music was good but this put me off them.  I’ll keep an eye out for them though because I can see me liking their music.

I’m not A big fan of The Streets, their music isn’t bad just not me but my friend is a fan so we stayed for them.  I’m a little disappointed that we didn’t stay for The Chemical brothers but my friend had been at Take That the night before and I’d been out at a friend’s house much later than I had planned to be so we called it a night after the The Streets wrapped up. I loved it and will probably go next year.  maybe my writing skills will have improved enough to give A much better account of my day.