Good morning wherever you are, or good afternoon or evening depending on when you are reading this. It’s morning here in cloudy England but apparently the sun will be making an appearance at some stage during the day.

Despite a dreary start to the day I am feeling quite energised now and I’m feeling like I need to fire myself up a little. So I thought I’d write a blog post 😀

As I said in a post last night, I am listening to On Writing by the awesome Stephen King and this has really inspired me to get my arse into gear and get some fiction done. As some of you may know I finished a draft of Avoiding The Game and I’m now little that breath a little before looking at it again so I’m working on Project Apollo to see where I went wrong with it and to start planning the rest of the story. I’ve only got about 20k words of it so it needs a middle and an end. I’d also like to add more to the start of the story so that needs to be roughly plotted out too. Owen has some good notes on it too.
I was concerned that I had lost my way with it as I felt the last part of what I’ve so far done drifted a little, but after reading it last night I’ve seen that its not bad, some of the writing is weak but that can be fixed. I was concerned that the story dropped off but I think it’s okay, or will be with a little tweaking.
So the next stage is to get on the blower to Owen and do some plotting and get actually writing once more 🙂

It is very easy for my confidence to be knocked when I am writing and seeing as I am my own worse critic I end up doubting my own ability a lot. As I’ve been working Avoiding The Game (working title) I’ve slowly lost faith in myself which says that this project is not my best work. This leads to me loosing that faith in myself and not having that much-needed passion about writing. Then I start reading Project Apollo, which I know needs a lot of work to get it back on track, and I see that I CAN write and its pretty good (I’m not being big-headed (much lol) just trying to get it into my head that I can write). As I said Project Apollo needs work. It veers off in a direction that is weak and as I was working on this draft (during NaNoWriMo) I lost my way with it. I had a rough outline for the first few chapters but once I ran out of those notes I lost all direction. So now me and Owen are both reading it (separately) and both making our notes so hopefully we can find the point where I lost my way and plot out the rest of the story from there as well as making the notes for what we need to add into the story.

We also need to do some work on the layout of this so that’s another aspect it I need to think about. Me and Owen have talked about how we would like to lay it out so it’s just a case of setting that up.

What I’d like to have done is to have each stage of the story loosely plotted out and the lay out set up too. Along with the story which feels quite complicated there is still a lot to do but I need to appreciate that this is a bigger story then I was thinking it would be. This will also set the standard for the rest the fiction from this universe so we need to be spot on with it.

I would just like to throw in a quick link here, I found this episode of The Dead Robots Society very interesting and helpful and I hope you do also.

I am not someone who is getting excited over the Olympics, even though it is taking place a few miles away from where I live, but I did watch the Flame pass my work today.  It had to be done, to just take that brief moment to watch what is the ultimate sporting icon pass so close.  With it though came all the sponsors and the politics that are now part of the olympics.  Most of the people who I know honestly could not care less about the Olympics being in this country.  It’s viewed by many as just a massive waste of money which will be a complete disaster, I don’t think that myself but I can see costs spiralling out of control.  We have already seen the security company who are to provide security for the games fall short and the army have had to be called in to fill the gaps.  Knowing the British tabloids there will be multiple revelations about corruption and influential people getting priority seating and so on.  Then there will be the failed drug tests, the disputed judgement calls and I’m sure the controversy over the Team GB football team will come to the headlines once more.  Add in the great British weather then it has the potential to be as disappointing a wash out as a lot of people expect it is going to be.  I don’t believe that it is though, I think that it is going to be something that can be remembered by the country for many years and despite the loss that some people have had in being moved out of the areas where the olympics will take place I think it will do  long-term good for a country that needs a bright star to inspire us to regain our greatness. 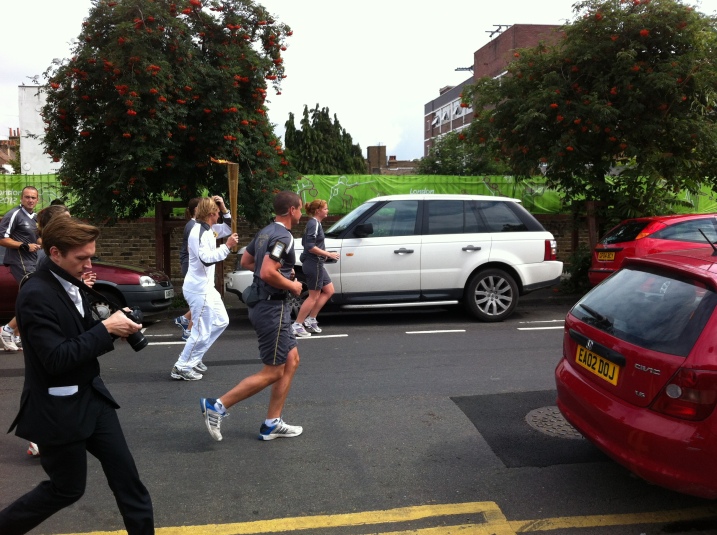 I have heard lots of writers say that they don’t read books when they’re writing because their work could be contaminated by what they are reading.  I never really paid much attention to that idea and I have always read books while I’ve been writing, but it did affect what I was writing.  I first got into reading in my late teens after I brought Tom Clancy’s  Rainbow Six, this is still one of my all time favourite books and I really want to read it again but I have a big back log of books to read so it’ll have to wait.  As there was a ‘2 for £10’ I brought The Bear And The Dragon as well, also a great book.  I started writing a few years later and  had been reading Clancy’s books which are international espionage,  technology,  heavy fiction and so forth and I found that was the sort of thing that I was trying to write.  The first thing I ever wrote is military based and it holds a lot of technology aspects (We’ll hopefully be re-writing that in the next couple of years)  I then started reading The Da Vinci and Dan Brown’s other novels and I found that I was trying to put little puzzles in the story for my characters to try to solve, it didn’t go well!  But it was still writing, it was still getting the words out of my head so I think that in the long-term I have benefitted from that.

I’ve been writing for about seven years now and as I’ve said in previous posts I have only really gotten serious in the last eighteen months but I don’t seem to be as affected by what I am reading anymore, although since reading Scott Sigler’s books and listening to his podcasts I have noticed that what I write has a little more horror in it.  As a general rule though what I am reading does not seep its way into my writing, I think lol.

What I think that I take from what I’m reading now is more the craft of writing and some inspiration in what I write.  Obviously I’m not going to copy, plagiarise any of what I read but ideas are sparked from what we discover.  It’s the same with films.  I was watching the film 127 Hours and a tiny bit from the beginning gave me a great little idea for part of one of my stories, I’m not sure if I can use it but the idea is there and if I cannot use it I’ll recycle it and put it somewhere else.

Someone I used to work for would say about rival companies that it does not matter what they are doing, what matters is what we’re doing.  Because if we’re doing our job right then we don’t have to worry about anyone else.

When he said that to me it really sunk in and i think that no matter what anyone else is doing, or what the market place may be doing if what we are doing is great, then it will win through.